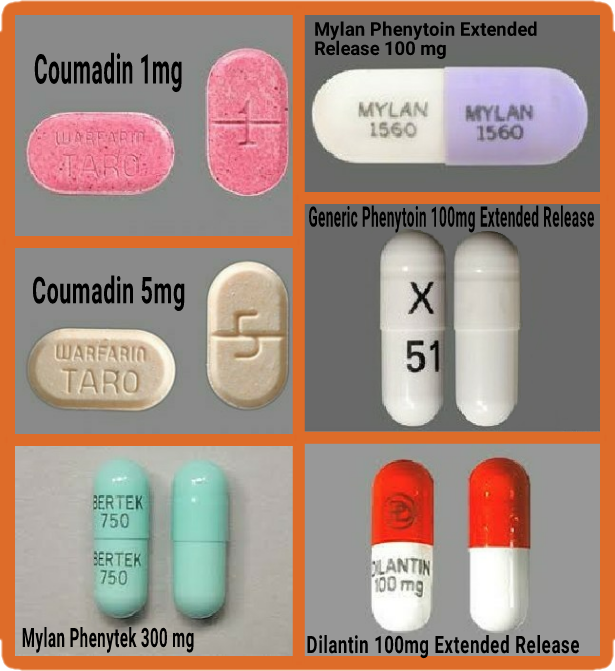 I went to Pharmacy Technician School. Almost graduated, but I accepted a job at the place I just retired from, pay was a lot higher in industry.

Some drugs interfere with others. I take Phenytoin for Seizures, not Grand Mal, Temporal Lobe. Phenytoin has a weirdness to it. It saturates. Taking a little more raises the blood level, a little more still, maybe raises it a little more yet, but just one tiny increase after a point, and your level can shoot way up. It’s because most of it is metabolized quickly, but at some point, the ability to metabolize becomes impaired, and your blood levels climb disproportionately. Taking certain new medications with Phenytoin can cause the blood value to skyrocket (essentially over dosing), even though before you added the new medication, you were fine.

Last November I developed afib. Afib can, and in quite a few people, does, cause strokes. So you have to take an Anticoagulant. I take Coumadin, an older drug, works by blocking Vitamin K Production essential for Clotting. So, I can’t eat foods high in vitamin K, Spinach, Dark Greens, Collard Greens, and more, lest it reduce the effectiveness of Coumadin.

I can’t eat other foods that are natural anticoagulants, lest I bleed far too easily.

There are new Anticoagulants, you can eat without regard to Vitamin K, but I’d think Natural Anticoagulants would still be a problem.

“The prothrombin time – along with its derived measures of prothrombin ratio and international normalized ratio – are assays evaluating the extrinsic pathway and common pathway of coagulation. This blood test is also called protime INR and PT/INR.”

With Phenytoin, you just get Blood Levels.

Both, of course, are Blood Tests.

Pharmacies give you whatever is cheapest for them, including medications made in India, Pakistan, Ireland, etc.

But each Generic version can be, and usually is, different from other Generic Versions, or Brand Drugs. So, levels are important. In my case, changes in one medication likely causes changes in the other.

My neurologist specified that the pharmacy must supply Mylan manufactured Phenytoin, and truth be told, they did so, until this last refill, they said the Mylan version isn’t available, and it isn’t. Mylan had manufacturing issues, they stopped production, will be resuming soon.

I was taking Phenytek, the same as Phenytoin, except there’s a 200 mg and a 300 mg pill, Phenytoin is 100 mg. I take 2 Phenytoins in the morning, and 3 in the evening. With Phenytek, I take one in the morning, and one in the evening, but they rattled, so I pulled one open. Guess what, the 300 mg Phenytek has three tablets in the capsule, and the 200 mg Phenytek has two. Weird world, you’re actually taking two or three inside a capsule, rather than 2 or 3 capsules.

I stopped taking Phenytek because Mylan stopped making them, for a few weeks, or months, or whatnot. I was then put on Phenytoin. Same dose, at that time 300mg AM – 300mg PM.

All because Mylan had manufacturing issues, discontinued Phenytek for a period of time, and I was switched to Phenytoin.

And, drum roll please, it’ll change my levels of Coumadin, so, to save dollars, the insurance company is facing several hundred dollars, or more, in blood test fees. Each time the Phenytoin level changes, the Coumadin level will change, and each time the Coumadin level changes, the Phenytoin level will change.

Mind you, it may be just a few more tests, and a few more adjustments, until the next bargain basement of foreign Phenytoin comes along, and the nightmare starts all over again.

Not all Generics have this concern, but some do, and your health may be adversely affected by it if you’re not aware.