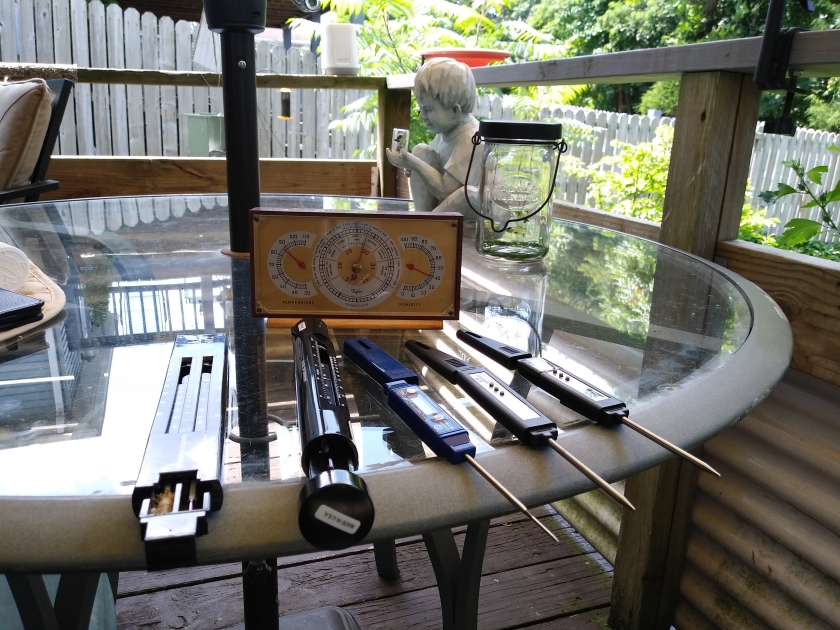 The Instruments were placed so that the Sling Psychrometers were open for Air Circulation, and the Digital Thermometers Covers were removed and the Sensing Probes were not contacting the table. The Wick on the Wet Bulb Thermometer was saturated with water, and the reservoirs filled as practical.

Memories are funny things. They tend to remember what we want, or bias it that way.

I wanted to objectify my assessment of these Instruments to see how they compare. No attempt has been made to compare these to the local weather values for the time the measurements were made, conditions vary from area to area.

The Digital Thermometers have a Sampling Time Delay, when they are first turned on, they display the last value read, after a few seconds, the current reading, providing it isn’t far from the last reading, and if it is far from the last reading, they display a series of Steps of Change, one needs to wait until the temperature readout stabilizes to accept the reading. It can take perhaps 40 seconds for a big difference in temperatures. Being that the Temperature Rise was gradual, this wasn’t an issue with this series, and the readings were taken at about 5 Seconds after turning the unit on. Used as Pocket Thermometers for a variety of purposes, the thicker shaft of the probe on the A.W. Sperry Thermometers most likely means that the mass of the probe will slightly delay the final reading, especially on temperatures drastically different from the ambient temperatures the Thermometer was kept in prior to measurement. The Comark has a very slender Tip that would theoretically tend to reduce delays in reading the temperature.

The Desk Top Weather Set, a Thermometer/Barometer/Hygrometer, kept fairly close temperatures over the range tested. The Hygrometer would have been influenced by being brought from the inside of the home, to the outside, and ideally, should have been outside for a few hours, on a dry day, before attempts were made to take measurements. There is initially a large difference in the Hygrometer and Sling Psychrometer Values. In target shooting, there is what is known as a flier, a bullet that failed to group, that may be the shooters fault, or a fault in the components. In the Sling Psychrometer Rows, the last data set simply does not seem reasonable. Something went wrong with the readings, likely that I wrote down the wrong temperature or viewed the scales incorrectly. So, that category is in gray, it’s included, but I do not believe it is accurate. Naturally that reflects upon the comparison of the data to the Taylor Instruments Weather Desk Set, so I wanted to mention that here.

I wanted to show how the Hygrometer Works that’s used in the Taylor Desk Top Weather Set, but the Internet really let me down, after an hour of searching, I found this. Wiki came through, thank you Wiki, I just wish, in general, they were less polarized politically.

The metal-paper coil hygrometer is useful for giving a dial indication of humidity changes. It appears most often in inexpensive devices, and its accuracy is limited, with variations of 10% or more. In these devices, water vapor is absorbed by a salt-impregnated paper strip attached to a metal coil, causing the coil to change shape. These changes (analogous to those in a bimetallic thermometer) cause an indication on a dial. There is usually a metal needle on the front of the gauge that will change where it points to.

The above says that the type found in my Desktop Weather Set is the least accurate of several types available. The Thermometer and Barometer work just fine, and the Hygrometer gave better performance than I expected.

Concerning the Sling Psychrometers, I wrote about them before, please see:

A Tale of Two Sling Psychrometers

Below, look for the Arrow Pointing Up, and the Arrow Pointing Down. Being that the Temperatures on the Wet and Dry Bulb Scale both are aligned with each other, such as 65 and 65 on the top set, or 80 and 80 on the Bottom Set, (for the top one, the Baker), the Humidity should be indicating 100%. Notice it is not.

Below that, the Bacharach shows the Wet and Dry Bulb Scales Aligned, and the Humidity is 100%.

Both readings in the picture are effected by Parallax. Although on the Baker, on the Top, the Scale looks like it’s pointing to 90, it’s more like 95 when looked at correctly. Conversely, the slight apparent difference in the Bacharach doesn’t exist, the pointer is at 100%.

It seems like above a certain humidity and points higher, that the scales cannot be trusted. But the Baker Instrument can be used to derive the temperatures from the Wet and Dry Thermometers, and those temperatures used with a Smartphone App, or Charts that must abundantly be available online, and for that matter, I’m sure there are online sources to calculate the humidity based on the Temperatures. By observing the two Sling Psychrometers, it seems that the Baker Dry Bulb Thermometer reads a Degree or so Higher than the actual temperature and that will make the Humidity Appear Lower than it actually is. So I have been deducting 1 Degree from only the Baker Dry Bulb when I make routine measurements, though in the case of the chart above, I listed what I read.

There is a movie that I own called Longitude. It’s about the need to measure Longitude while at sea. Sailing ships, long ago, could measure Latitude, but not Longitude. This resulted in ship wrecks, and delayed arrivals and returns of ships that were otherwise off course. They needed an accurate timepiece to determine their location. It was stressed in the movie that accurate didn’t mean perfect, it could be off 20 seconds per day, but if it was consistently off 20 seconds a day, they could compensate for the time gain or lost. What they didn’t need is one that was 20 seconds off one day, 45 seconds off the next, and 10 seconds off the day after that.

Likewise with the Sling Psychrometers, or any of the devices listed, you can compensate for imperfections if they are consistently off, so both the Baker and the Bacharach are useful. For in home measurements perhaps 60% Humidity or less, the Baker would be fine, even using the built in scales, but as the Temperature Rises, the Accuracy of the Scales is in doubt. If you buy either, or other, models, first be sure to look at the Temperature of the Web Bulb Thermometer before you wet it, it should read the same as the Dry Bulb at that point. Then try to compare the Dry Bulb Temperature with a Trusted Source. Use the Built in Scales, but consider using an App on your Computer, Tablet, or Smart Phone. I use: Humidity Calculator