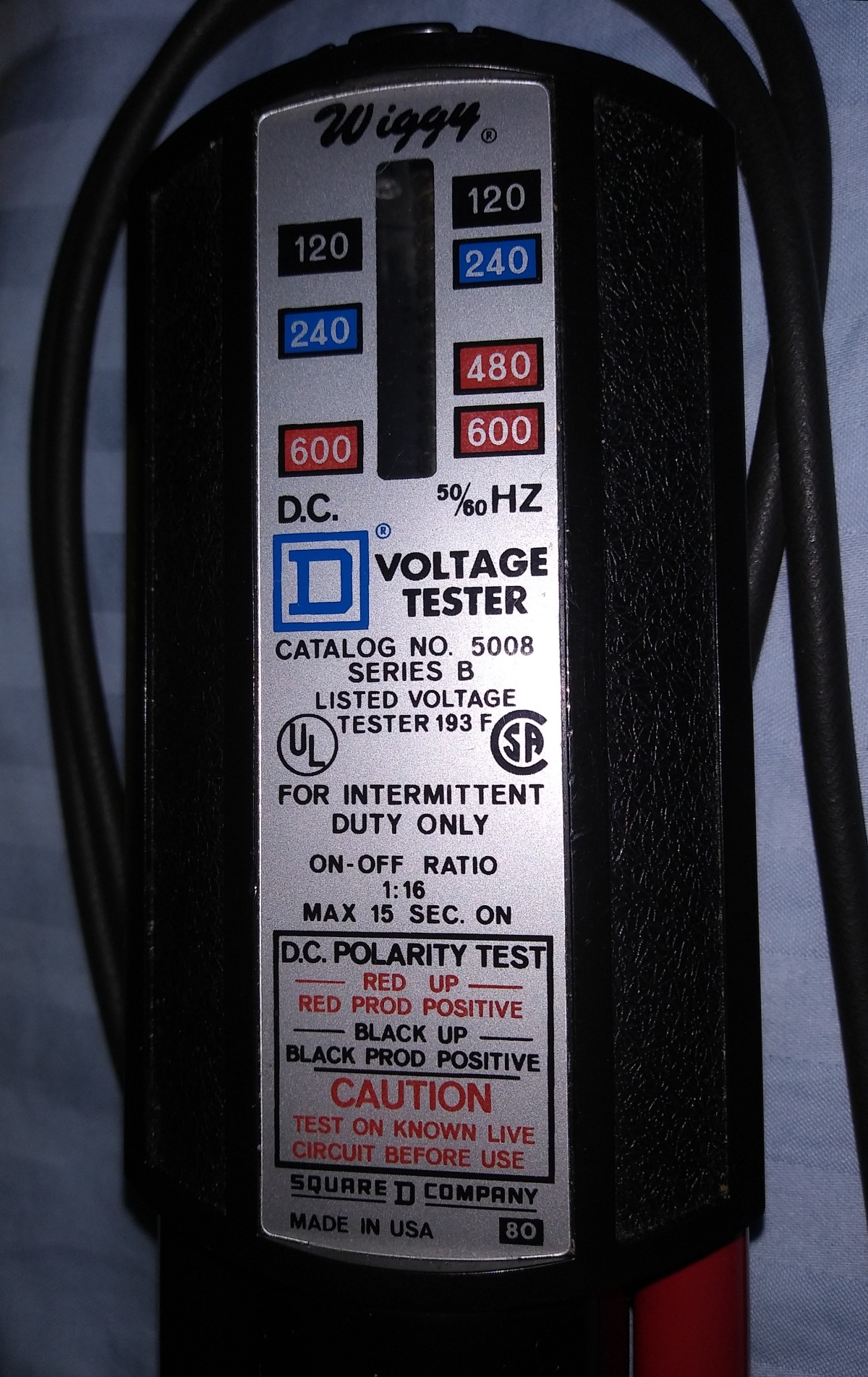 Words fascinate me. The origin of words, my son and his wife gave me a Word of the Day Calendar, and when I was through the year, I bought another. Interesting stuff.

At work, we had Voltmeters, Voltage Testers, Digital Voltmeters (DVMs), Meggers (High Voltage but Low Current Generating Device used to look for existing faults or induced faults in areas where a fault was imminent, as the High Voltage would escape where the insulation was weak), Hi-Pot Testers (no, you can’t use them on Pot, it stands for High Potential (High Electrical Potential, i.e. High Voltage, oh never mind) etc. And I saw when I was in Electronics School; but we did not use; Vacuum Tube Volt Meters (VTVMs) – These were presented as historic items, we didn’t use them, since Solid State Meters at that time were now able to achieve High Input Impedances without using Tubes.

But a Voltage Tester used by Electricians is like a Go / No Go type of thing. Is there voltage or not, and if it is there, approximately how much, and is it AC or DC, and if it’s DC, which Lead is Positive.

Voltmeters give accurate, precise, measurements within the specifications for the meter.

If I want to know do I have 125 VAC, or 115 VAC, I would use a Voltmeter, as it can tell me, precisely, what I have. I tested for the Voltage Drop across my Extension Cord when used with a Heater, it’s a 14 Gauge Appliance Extension Cord, and you’re really not supposed to use Extension Cords with Heaters, unless you really need to, and you use the proper gauge cord, and it’s not very long, and your receptacle and wiring are in good shape and modern. But when the Heater is on, the Voltage at the Heater Plug (i.e. plugged into the end of Extension Cord) drops a few volts. I could not use a Tester to see that, it has poor resolution, I’d need to use a Voltmeter. But if I wanted to see if any Voltage was there, at the Extension Cord Receptacle, or at the Receptacle on the Wall it’s plugged into, the Tester is just fine. There are many uses for Testers, many uses for Meters, and many uses that could be done by either, but some things are done better by one then the other.

I have yet to buy a Meter on Ebay that actually is complete and works. I’ve bought 2. One of them was an old Analog Multimeter. Beautiful Shape, but it doesn’t work. The woman that swore up and down that it worked in the Ebay Listing was profusely sorry. I think she refunded the listed price and I told her not to worry about refunding the shipping.

I just bought a Wiggy. The Polarity Cap End to it is missing. In truth, it works fine, but the cap is used to show the Polarity of the Test Probes relative to their placement on a DC Source. The Polarity Cap has a Red and Black Magnet, and when the Red Probe is held on the Positive DC Test Point, the Red Magnet Pops Up, and if I hold the Black Probe on the Positive DC Test Point, the Black Magnet Pops Up. Sweet, and simple.

We had 120 VDC Systems at work, but at home, all I have is a 9V Battery, and the Tester not designed to measure to 9, or 12 volts, and I won’t miss the Polarity Feature on AC. Otherwise the Tester works fine, the seller accurately described the Tester by showing it, clearly the Polarity Cap was not on it. I bought another Wiggy, sold for Parts, it’s a different model, I’m hoping the Polarity Caps are the same, and I’ll use the one in the best shape overall.

This is what I started about, words, I now have an Official Wiggy, made by Square D, apparently in the late 1970s, and the history of this Type Tester goes back well before that, to 1918 and possibly earlier.

One line in the forum has this:

The Square-D company in the US either bought Wiggington, or the rights to the tester, because they made a huge number of similar ones. The early ones had “Wiggins” labels on them, so the resemblance was probably not by accident. They were once so common, old timer electricians around here used to ask for “a Square-D” when they meant that kind of tester.

Wiggington originally made them, labeled them as Wiggins, and Square D called their version Wiggy.

The older guys at work (ahem, I’m kinda in that category now, but I wasn’t then) called them Wiggy’s, and most called the Ideal Testers Wiggys as well, but someone used to call them “Sluggers”, I found no other references to that term online, but that is how language goes. Regional dialects have words that people in that region recognize, but may not truly be the correct word for something.

But I had no idea, until this week, that Wiggys were made by Wiggington, and early Testers bore the name Wiggins, and that, in turn, became Wiggy. How about that? Etymology at its finest.

And if you like Test Equipment, you may find the following interesting: