This Blog Entry pertains to the more traditional Ceiling Fans that use Pull Chains for the Light, the Fan Speeds, and have a Slide Switch on the Fan for Forward and Reverse. In addition, these Ceiling Fans use a Capacitor. These are not the Electronic Remote Control Ceiling Fans.

Ceiling Fans may be wired to be controlled from one or more locations (such as a Three Way Switch) and that must be considered for Safety when working on them. Turning off one location, and having someone turn it on at another while you are handling the wires can be harmful or fatal. Not all injuries are caused by Electrical Shocks, as people tend to react strongly if being shocked or seeing sparks and have fallen from ladders trying to distance themselves. The Safest Way is to locate the Circuit Breaker for the Fan and Open it, being sure that you have the correct circuit. Testing the Wires to be sure they are deenergized is the next step.

We bought our current home a few years ago, it dates back to 1930s, and the home still had Knob and Tube Wiring, and Wiring Issues, so we had the home rewired. As purchased, the home had 5 Ceiling Fans, all working, and all kept in place after the household wiring was updated, including the addition of the correct Electrical Work Boxes for mounting Ceiling Fans.

Since then, 3 Fans Ceased to Work.

The Circuit Breaker Should be off. In my case, I took down the entire fan, and repaired it at my leisure. Removed the Blades, the Bulbs from the Light (as applicable), the Glass Shades from the Sockets, and then Removed the Hub from the Ceiling Area.

Before removing the Wires, be sure they are White, Green and Black (or otherwise note, or mark, how they are paired). Check to be sure they are not Energized. De-Wire (mine had Wire Nuts) the Neutral, Ground, and Hot Wire. I covered the bare ends of the wires in case the power was restored to the circuit inadvertently. Remove the Ceiling Fan from its Mounting Assembly.

When Removing the Hub that Contains the Light Kit (my Dining Room Fan below) on my Fans, the Switches and Capacitor are mounted inside of it; take plenty of photos using your cellphone or camera and be sure to get all the angles of connections. Be sure that the images are good and that they are clear before beginning. 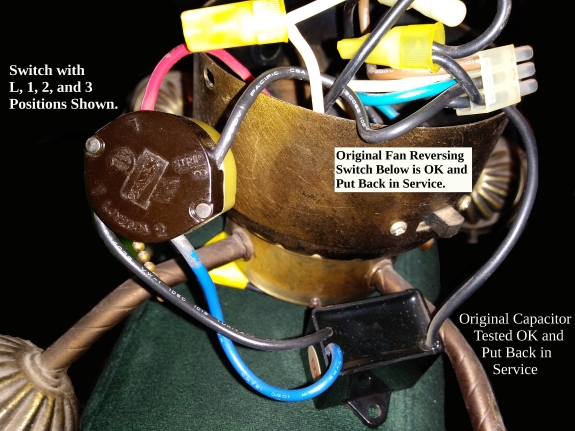 The First, the Dining Room Ceiling Fan, the Pull Chain Switch wasn’t working since the Barrel that goes through the side of the Fan Housing had broken off, and the Links on the Chain would catch on the thin metal housing and keep it from being pulled. 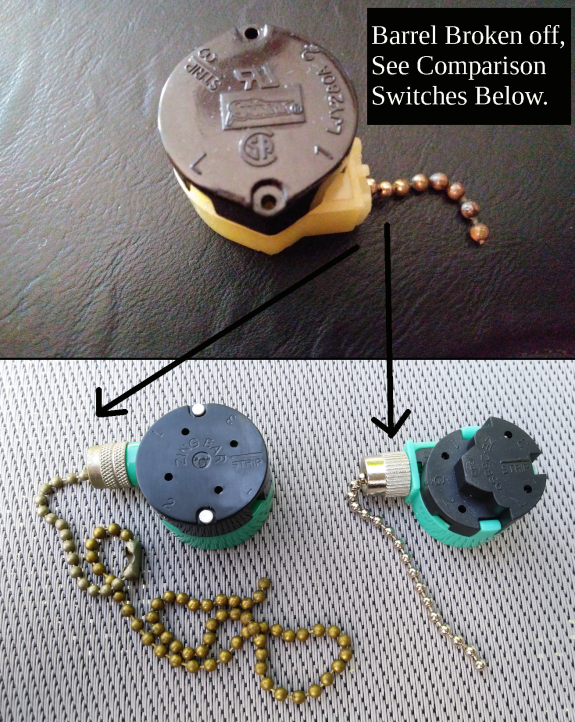 The Second, a Kitchen Ceiling Fan, had a Blown Capacitor.

The Bedroom Ceiling Fan is still pending diagnosis, soon to come this week.

The images shown are a combination of the repair work on the first two fans. For the first, I purchased a pair of Fan Speed Switches from Amazon, they work on most 3 Speed Fans. Problem is, they didn’t work for the first one I repaired.

Note that the connections you find with the Ohmmeter is not necessarily indexed to the Off Point for the Switch from your fan, unless you know for sure the that the one from your fan is in the Off Position before you start.

The Original Switch Tested as Follows, for 1 Off Position and each of the 3 Speed Positions, in all cases the Line Continuity to Points 1, 2, and 3 as written, (Closed Denotes Continuity, Open no Continuity)

The Amazon Switch Tested as Follows, for each of the 3 Speed Positions and 1 Off Position:

The Contact Positions are correctly shown on the Amazon Page Below:

But I was confused by the Switches in the Lower Left, and did not, at that time, understand the connection diagrams.

The Switch I needed was purchased at:  Ceiling Fan Parts

I corresponded with them by email, they told me the switch I would need based on the Manufacturer and Model of the Fan, and the Existing Wiring Color Codes, and with that particular switch, there is a Wiring Diagram (In an Libre Office Format) and Contact Connections.

The Cam Pattern in the above Image, (to the right of the Switch) makes (closes) and breaks (opens) the Electrical Pathway to the Switch Contacts. Though with my Dining Room Switch, L is connected to the Contact that Wraps All the Way Around the Cam, on my fan, L is from the Reversing Switch, and Contact 3 goes to the Motor, and only in the Off Position is Contact 3 Open (See the first table). Contacts 1 and 2 go to the Capacitor.

Using the Ohmmeter to plot out the contacts of the switch (if it’s working, all that is wrong with mine was the Broken Mounting Barrel) will be sufficient to help you order the Correct Switch. Failing that, Contacting the Listed Company may help by Manufacturer and Model Number, or take it apart and map it out.

The Switches Feature Quick Wiring Push-in Wire Connectors. Stranded Wiring is not likely to push right in. On the first Fan I repaired, the Capacitor was reused, all the leads were tinned with solder. On the second fan, I replaced the Capacitor and Switch (it was the switch from Amazon, they were correct for the Kitchen Fan), and the Capacitor Leads weren’t tinned, so I Tinned the very ends of the wire before continuing (I had taken the fan down and did the work on the Workbench).

Removing the Wires from the Switch. They are flat metal Springs, seen in the Photo Above. Once the wire is Pressed-in, the end of the flat metal binds on it, locking it into place. To Removed them (on the assembled switch), I used a Cake Tester, a Slender Rod used to see if Cakes are Done, since inserting it into a cake, if it’s not done, it will pull dough out with it. Insert the Cake Tester into the DE-ENERGIZED Switch Wire Opening (L, 1, 2, and 3 above) along the wire, and it opens the Spring Metal to allow the wire to be pulled out. Then with the wire out, pull out the Cake Tester. A Very Slender Smooth Nail would work, but I tried a smaller Safety Pin, it didn’t work.

Especially if the Fan Switch is Plastic, Hand Tighten the Barrel Nut only, as over tightening may break it.

Capacitors? Here is the one I bought for the Dining Room, but did not use. I’ll keep it for a Spare, or for people I know that may need Ceiling Fans Repaired. 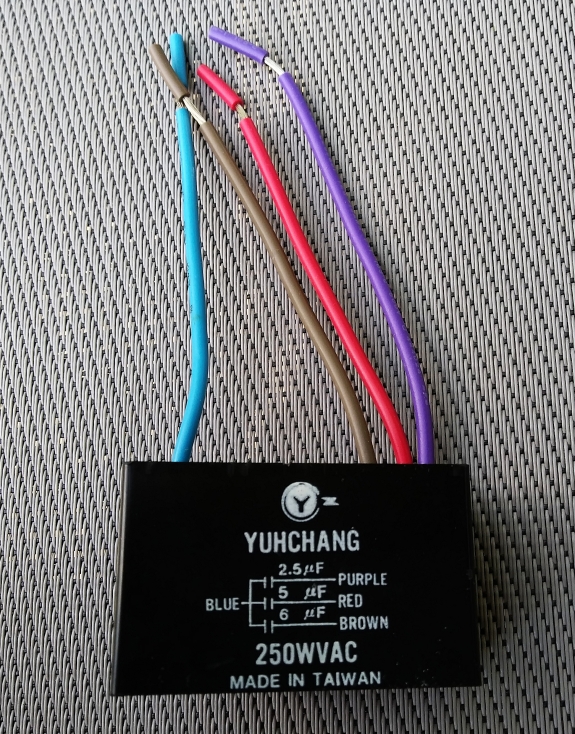 Select the Number of Leads

Mine, shown above, is 4 leads.

For Mine, the table above says Blue is Common, Brown is 6uf, Red is 5uf, and Purple is 2.5 uf. Yep, that’s my application alright.

At times, they may not have the exact Capacitor, Contact them (or any other vendor) for advice. You can be off by so much Capacitance without affecting performance significantly. You can use a 5 Lead Capacitor that has the correct Capacitance in a 4 Lead Application if you Cap (Wire Nut or Tape) the Unused Connection, etc.

Good Luck, there is more to the Switches and Capacitors than I thought.