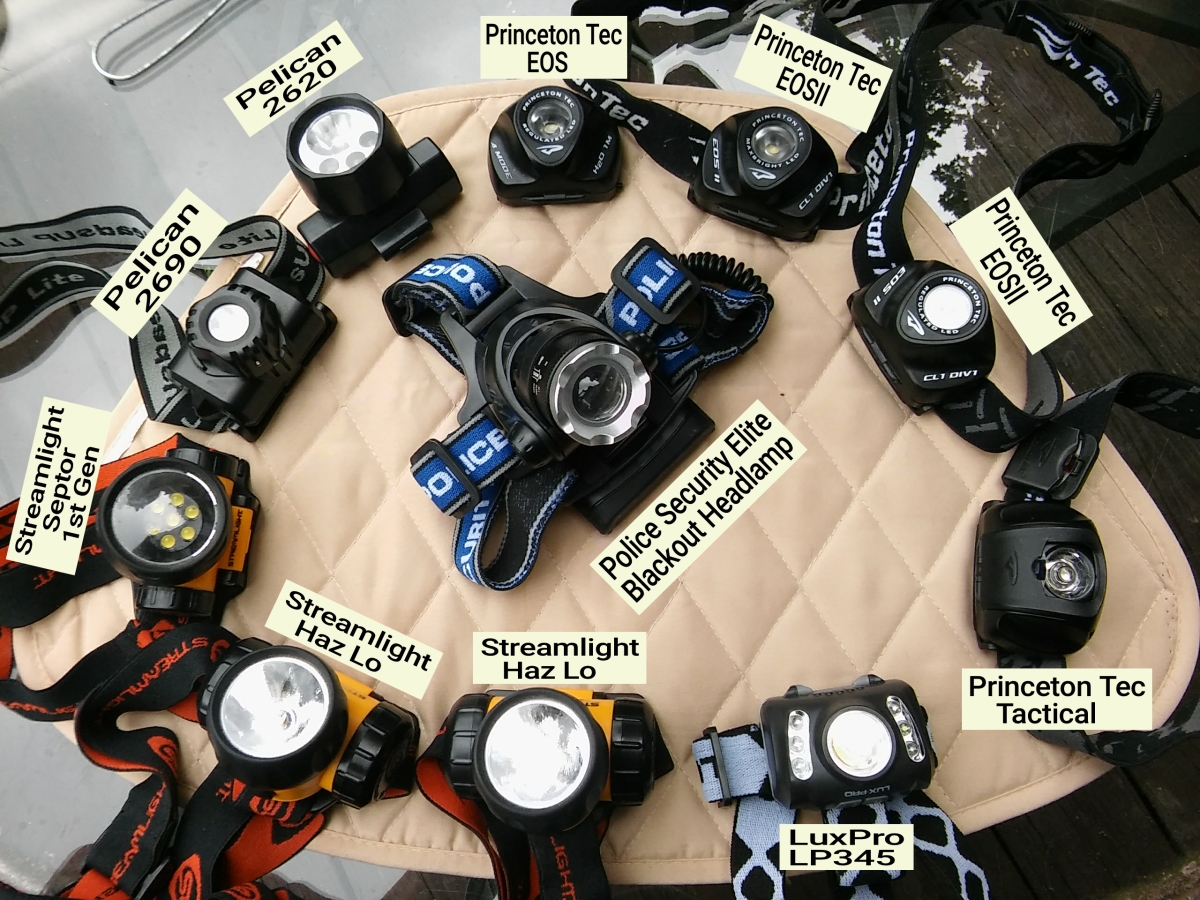 2690, the reason I wrote this blog entry. I have opinions on this Headlamp that may concern Eye Safety. This experience was at least 6 years ago, things might have changed. But even if this headlamp doesn’t have the potential to cause the problem I’m concerned about, LEDs in general do. I still have the 2690, but I’m more cautious about its use than before my incident and subsequent research. See the main portion of the blog for more.

In NONE of the following Headlamps (other than the 2690) did I notice this problem, they’re here for fun, for the benefit of others. My failure to notice a similar problem in any of the following might mean Better LED Optics, Less Powerful LEDs, or for other reasons. The 2690 is well made, seemingly durable, bright. But, the rotating lens to turn-on the Headlamp is an issue for some. Dirty and contaminated hands grabbing the lens is one issue. And the rotation is firm on newer units at least, and mounted on hardhats, wants to turn the unit and not the lens. Yet it has the potential to be more durable than lights with a rubber membrane you push down on to activate the light (because there’s no rubber switch cover), and the 2690 is approved for working around Flammable and Ignitable Gases and Vapors, as their approval stipulates (as are a few other units below).

2620, the example shown is from the parking lot outside the plant at work. The Elastic Band, the Mounting Plate for the Band that the Headlamp Mounts to, were missing. The Headlamp must have fallen from a car. It works, but a tab on the case broke, the battery compartment cap is held on by only one tab now. I never had one of these at work, so I just bought a new one (not shown here but now frequently used), very happy with it. It has a single Xenon (incandescent) bulb and 3 LEDs, the Xenon or LEDS are on as switched through the settings, not the Xenon and LEDs simultaneously though. Assembled in the U.S.A., another great selling point.

Most made or assembled in the U.S., especially the models discussed. Regulated power to the LED, maintains a constant brightness until the battery voltage drops below a certain point, then Dims to a lower setting.

EOS, one of my first Headlamps. It is water resistant, has Low, Medium, and Bright settings, and a flashing setting. This one has been sent for repairs, one of the two tabs that hold the headlamp to the backing plate broke off, after many years. They had a lifetime warranty, now I believe 5 years, but I’d gladly buy a replacement if needed after the 15 years I’ve had it, it was used much.

EOS II, we used this model at work. One is an older generation, it’s not as bright as the newer one. Princeton Tec seems to upgrade their line as the technology becomes available. They have 2 Brightness Levels and require a long push on the power button to turn off, to preclude them being bumped off in a critical situation. These Headlamps are approved for working around Flammable and Ignitable Gases and Vapors, as their approval stipulates.

EOS Tactical, 3 Brightness Modes, has several colored lenses, useful in a variety of situations. For Instance, I have a smoke alarm, the third or 4 one that’s failed, and I took it apart. Taking photos of the dust in the smoke sensing area of it, I’m surprised how vivid the dust is under red light, but much less significant looking under white. This Headlamp, also older, is out for repairs too, it still worked fine, but the switch cover rubber was splitting. I don’t view this as a defect, if not for the original warranty, I’d buy another if it stopped working, but while I can I’m having it repaired.

LP345, an interesting lower price Headlamp with one Center LED and 3 Multicolored LEDs to the left and right of the Central LED. A contractor had this at work, I was impressed by the Red and Green LEDs as he went through the brightness settings. They illuminate well.

Haz Lo (Hazardous Location), another manufacturers offering of specialized headlamps, similar to the EOSII in terms of being permissible to use around Flammable and Ignitable Gases and Vapors, as their approval stipulates. Just like the EOSII, they’re great for home use as well.

Septor, multiple (7) LED Headlamp with brightness settings that illuminates 1, 3, or all 7 LEDs. I’ve painted the reflector on mine black, it prevents reflections that would create arcs of light I found distracting that occur largely from trying to accommodate multiple LEDs. Nevertheless, it’s a nice headlamp, nice brightness levels, amply rugged. I like this light, freely use it, and my wife prefers it.

We had an exterminator at the home, he used this model light, I was impressed. The lens assembly moves in and out, producing a small, very intensely illuminated, rectangular area, or a broad spotlight, still intense, but not nearly as bright since the light is distributed over a larger area. It uses 4 AA Batteries in an External Pack that goes on the back of the head, hard plastic between your head and the batteries, and a rubber outer case. I’ve seen rechargeable flashlights explode, for that reason, I’d not want a rechargeable battery on my head, but I feel safe with this light due to the conventional batteries.

I think this model has the potential to be harmful to the Eyes, or specifically the Retina, if misused. None of the Headlamps listed here are toys.

LED Lights and Retinal Damage is something I think will occur with some LED products until oversight is authentic and uniformly applied.

Problem is, I don’t think, in the U.S., we’ll ever be at that point. Lasers are being imported from China with markings saying they meet emission standards (brightness), that seemingly don’t, I’ve seen a video where a Laser Marked Low Power actually burned through paper.

An article I read years ago I can no longer find, said in Europe, LEDs, and LASERS, are regulated by the govt, apparently to limit the possibility of causing harm when used by people not familiar with them. I’m not suggesting low power LEDs and Lasers aren’t available in Europe, they likely are, but by the time they get to a substantial output, regulation hopefully applies.

I am a Tech School trained Optician, have an Associate Degree in Electronics, and worked in heavy industry for 25 years, nearly 1/4 of that was a full time safety representative for union employees, one of several in that position in my plant. OSHA, Union, and Company Training for Safety Education was frequent, and Hazard Recognition is part of that.

When I started working, we had incandescent flashlights. Over the years, headlamps became popular, mounted on our Hard Hats, and these were LED. While I was in Safety, available in the plant were these Headlamps:

The Princeton Tec is more compact than Streamlight, the Pelican, also compact, was incandescent and LED, but only one or the other would be on. They are all worthy products. We got hold of several Pelican 2690 Headlamps, Single LED, no Incandescent Bulb, as trial samples and gave them to various employees to try.

I saw one employee, looking closely at the headlamp and twisting the lens that turns it on, yell out in pain as the light came on, saying the brightness briefly hurt his eyes. I’m thinking he’s being melodramatic. Weeks later, being the idiot I am, I’m twisting the lens, observing a set screw on the lens to see if it hits a switch (it doesn’t), only to have the light turn on, and I felt the brightness and reacted, pushing the light away. The problem is, I had a circular spot in my vision for hours. That’s not persistence of vision – that slight retention briefly by the retina when subject to a light – it was a retinal burn IMHO.

I notified Pelican, I collected all the samples or otherwise instructed others to be mindful when using them outside of work (at that point, it was decided not to use that model in areas that I, at least, had influence over and the trial samples were sure to be going home with some). And I was told by people testing them that employees standing in front and facing them while working were complaining it was too bright.

Pelican makes many fine lights and we used them, but something seemed clearly wrong with that model.

In my opinion, it’s what’s referred to as Point-Source Brightness. The brilliant light of an LED occurs at a tiny electrical junction, and if the optics are not properly designed, that Point-Source of brilliant light can damage the retina. Streamight HAZ-Lo seems to use an inverted Optical Pyramid in front of the LED to broaden the Point Source, Princeton Tec likewise uses technology in the optics to do the same.

All of these lights are only a tiny fraction of the brilliance of the latest and greatest flashlights and headlamps, using powerful rechargeable batteries, and High-Tech Modern LEDs, that, on their brightest settings, appear more like search lights than flashlights.

This is to help others be aware of potential hazards of poorly designed LED lighting, even in modest brightness due to Point-Source (or Spot Size) issues, or perhaps even lights designed to avoid Point-Source issues that are so bright, and the light so concentrated, that for reasons still not studied, or understood, other types of retinal damage may occur. The Retina is a frail, tissue type structure. The eye’s lens system on its own concentrates the light on the retina, we may be risking much by careless use of a relatively recently emergent technology in high output LEDs.

I’m writing to urge people to be cautious around other people and animals when using LED Flashlights, particularly High Output ones, due to potential Retinal damage they may cause. In my case, I still can’t believe that hours later I still had a spot from my exposure to a much dimmer LED than many newly on the market.

….The device is fitted with a diffuser improving the uniformity and protecting against the effect of point sources (Fig. S1)…….

In this article, we analysed the effects of white LEDs on the retinal pigment epithelium. We found important structural alterations and damages leading to the disruption of the outer BRB after LED light exposure. At the molecular level, analyses revealed an increase of oxidative stress followed by cell death by necrosis, a rare event in this type of tissue.

The observed injuries of the RPE reinforce our concerns regarding the general and unrestricted use of LEDs in lighting products and the necessity of revising the product safety standards for this type of lighting, with the aim of to protecting our vision during our whole life‐time.

They refer to the Spot Size, rather than Point Source, but detail why it’s an issue. If it’s from 2010, gains in brightness of LEDs are probably much more than they’d ever guessed.

Be careful around LEDs; especially the bright ones, but for safety sake, be careful with all LED devices; not to shine them into you eyes, or those of others. And when spotting animals, once caught, consider using a dimmer setting. Exploring dark areas, have at it. They are extraordinary lights and technology.

A little “kind of related” levity